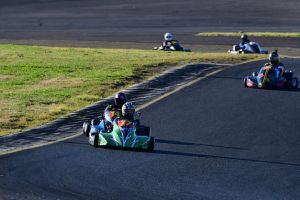 Perfect winter weather greeted the Superkart field for this one day State Meet at Sydney Motorsport Park. An event that would have a night session under light just to spice thinks up. It was a good field of Superkarts, 20 to be exact that came out to qualify on Saturday morning. The format was a qualifying session in the morning followed by 4 races, including one at night.

A couple of Victorian drivers attended the meet, namely the very fast pair of Ilya Harpas and Krisian Stebbing. In qualifying the drivers were trying hard, Harpas was attacking each corner with gusto. Lee Vella was doing some very fast times. Harpas claimed pole with a time of 1:34.8716, second fastest was Paul Campbell. Aaron Cogger and Stebbing followed next.

Race 1 was held late Saturday morning, Harpas made a great start from Stebbing, Cogger and Campbell. Laurie Fooks was the unfortunate first driver to retire, shortly followed by Lauren Shand. Stebbing was running in a strong 2nd position when he unfortunately joined the DNF list. Harpas was powering ahead in front, setting qualifying like lap times. Cogger was promoted in second place and hounded closely by Campbell. Dylan Stephens and Paul Battle diced for 4th place, both closely followed by Vella.

The result for race 1 was, Harpas 1st with a 40 second margin from Campbell and Cogger. Paul Battle was home in 4th and Vella rounded off the top 5.

The Class results for Race 1; 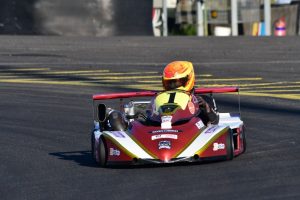 In the second race Harpas repeated his previous start and bolted away. Stebbing and Doherty followed in pursuit, just ahead of Cogger and Stephens. Campbell and James Stevenson did not even complete a lap. Stebbing again ran into trouble while he was in a good position, his second DNF in as many races. Cogger climbed up to second, just ahead of Doherty.

At mid race distance the order was Harpas from, Stephens, Doherty and Cogger. In the middle of the pack a four-way kart battle between Magaitis, Roese, Vickers and Dos Santos. This dice would last the entire race. Tony Moit retired while in a good position leaving only 14 Superkarts on the track circulating.

Harpas won in a canter, nearly a minute margin from Doherty and Stephens. Cogger came home in 4th and Vella rounded off the top 5.

The Class results for Race 2;

Race 3 started in fading light, Harpas continued his form and lead from the start. Cogger and Campbell diced for second as the rest of the drivers looked for track real estate, as they snaked their way through the first lap. James Stevenson had a small spin at turn two, he sat stationary for a while, he eventually engaged gear and resumed. Paul Battle was the first DNF of the race without completing a single lap.

Harpas showed his experience and speed, his lap consistency was second to none, claiming his third straight race win. Campbell was 2nd and Cogger 3rd. Doherty finished 4th ahead of Stephens.

The class results for race 3 ;

Race 4 was a night race, and what a spectacle where the Superkarts were under lights. Shiny paintjobs glistened under the track lights. Some drivers installed lights to add to the spectacle. Harpas made his usual starts from Cogger and Campbell. As the race evolved, the lone leader was up front from two dicing drivers, Campbell and Cogger. Just behind them was the pair of Doherty and Stephens.

The most interesting battle of the race was a 7 superkart freight train that formed between; Dodge, Robertson, Vickets, Magaitis, Roese, Dos Santos and Moit. These drivers snaked down the main straight trying to lose the tow, they frequently glared at each other trying to anticipate the next overtaking move.  This lasted the whole race.

Harpas won again. Campbell got the better of Cogger to claim 2nd place. Likewise Stephens beat Vella for 4th. Roese won the freight train battle to claim 6th. Magaitis was 7th from Vickers and Robertson. Dodge rounded out the top 10.

Congratulation to Harpas winning all the races.

The class results for race 4; 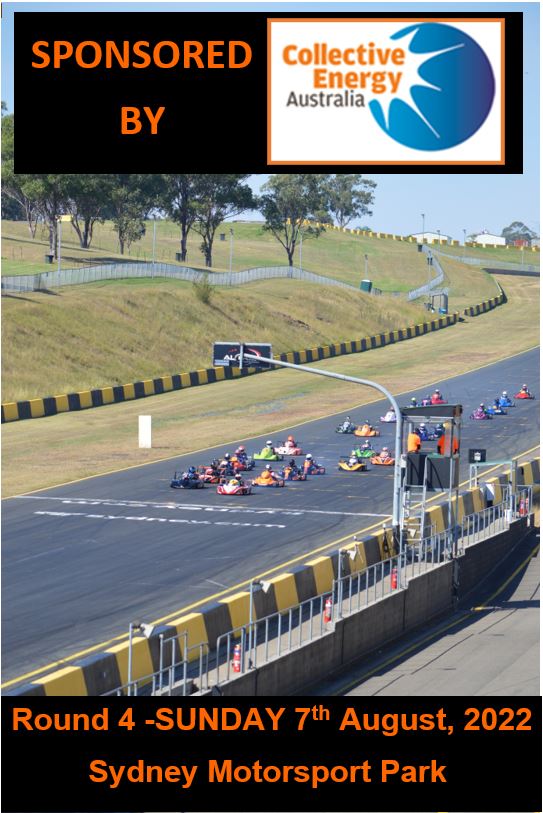